Home / Blog / Old Age is Not a Disease

We all know that pets as well as people slow down as they get older. Our pets will seem stiff, walk slower, sleep more and play less. But, how can we know if the changes that we are seeing are associated with the aging process, or if there is some other underlying factor? 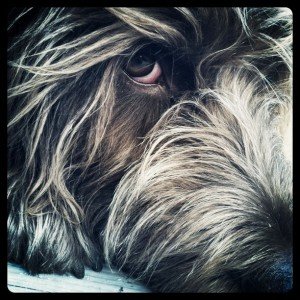 I just read this post from a Dr. Landorf at the Oakwood Hills Animal Hospital and thought it worth sharing:

Two recent patients have opened my eyes to the importance of taking even the most minor behavior changes seriously.

Dixie is an overall active 13 year old Pomeranian mix that has had no significant health problems. She has had yearly dentals and blood work since she was 8 years old. After our most recent annual physical exam, she appeared to be the picture of health. The next day the results of her senior lab testing showed mildly elevated liver values and a low normal red blood cell count. According to her owners her appetite and energy remained fine. The previous November her red blood cell count (hct) was 50% and this year 37% with the normal being 37-55%. In any other dog, without a previous hct, this probably would not have brought up any red flags.

We decided to perform an abdominal ultrasound to take a look at the liver and hopefully find the reason for the mild anemia. The ultrasound revealed a mass on the spleen that was bleeding and a generalized abnormal looking liver. We talked at length about our options and decided to remove the spleen and biopsy the liver. Dixie sailed through the procedure with no complications. The biopsy results showed a benign (non-cancerous) tumor on the spleen and age related changes to the liver associated with her body overproducing cortisone. Dixie’s hct has returned to 48% and her energy has increased significantly.

Another recent case involves a 13 year old black and white male neutered cat named Reilly. Reilly has also been the picture of health with the exception of surgery to remove a string as a 4 year old and some urinary tract problems as a young cat. On his recent annual exam his Mom had no concerns, but said he was a little more “clingy” and that he was sleeping a bit more and not playing with his toys as much. The owner who is in her 70’s made the comment that she felt the same way.

On the exam, I immediately noticed a change in that he did not want me examining his mouth. I completed the rest of his physical exam with no concerns except for his increased weight and finished by examining his mouth more closely. It was evident why he was head shy after finding what is called a feline oral resorptive lesion (FORL) on a lower premolar. A resorptive lesion is, basically, a cavity that occurs below the gum line exposing the nerve which is very, very painful. After completing his senior labwork which was all normal, the next day a dental hygiene treatment was performed and the mouth x-rayed to reveal another cavity on a lower molar as well. These teeth were removed as there is no way to save the teeth once the pulp chamber where the nerve and blood supply reside. At 10 days post procedure, his behavior returned to his normal younger self, playing more, sleeping less and more aloof!

I felt the need to share Reilly and Dixie’s stories as a reminder that pets are not able to verbally tell us when there is a change in their health. Pet owners, pet sitters, and dog walkers have a special bond with pets in their care and almost always know when something has changed. Many times this gets explained away as the pet getting older. In Reilly’s case, it was very evident on physical exam, but in Dixie’s it took changes on a routine blood screening from one year to the next to see that something was wrong. The thing I love most about being a veterinarian is that animals don’t complain! However, this does increase our responsibility to actively watch for any changes in our pets whether behavioral, decreased energy, limping, or changes in screening tests.