An interesting post by Jaymi Heimbuch on The Mother Nature Network:

Do dogs really like hugs? The short answer is not really. But the full answer is much more complex.

While some dogs make it abundantly clear that hugs are not tolerated, others might simply let the moment pass without comment. And others might absolutely adore hugs from you, their trusted companion, but not from other humans. Why is this? Aren’t dogs humans’ best friends, craving affection from us? Don’t they think hugs are as wonderful as a belly rub or rump scratch? 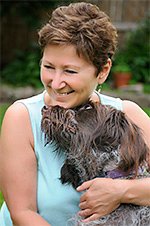 (Josie is clearly one dog who loves a good hug.)

We talked with Dr. Patricia McConnell, a certified applied animal behaviorist and respected expert on the topic of dogs. In her research and her decades of working with and rehabilitating dogs with behavioral problems, McConnell has become acutely attuned to canid biology, social interactions and body language. She provides us not only with insight into why dogs in general don’t like hugs, but also how we can tell whether or not our own dogs enjoy them.

Why don’t you love me?!
When delving into this topic, it’s important to get one thing clear: just because your dog might not like your hugs does not mean he doesn’t love you with all his heart. It’s hard for many of us to think that our dogs don’t enjoy our hugs because to us, hugs are a primary way we show affection.

“If you watch little kids, tiny little kids who are just barely able to stand on their legs,” says McConnell, “they wrap their arms around another to express affection, empathy and love by hugging. It’s just so hard-wired into who we are and what we do.”

McConnell notes that research on primates, especially chimpanzees and bonobos to whom we are most closely related, reveals that hugging is an integral part in giving and seeking out comfort and affection.

“And so I think when we tell people that dogs don’t like hugging, it’s like some primal, limbic part of our brain says, ‘You mean my dog doesn’t love me?!'”

But yes, our dogs do love us. Yet they love us in their canine way while we love them in our primate way. We are two very different species who have, miraculously, managed to become intimately linked through our evolutionary history. Even so, thousands of years of co-evolution doesn’t quite erase millions of years of separate species evolution. And that’s why we have to get into the social science of what a hug is to a dog.

Why dogs feel uncomfortable with hugs
When you take your dog to the dog park, or even just to a friend’s house where she can play with another dog, how do the dogs greet one another? There are myriad ways dogs say hello depending on if they know each other and are reforming old bonds, or are meeting for the first time and feeling each other out as they establish the pecking order. There is face smelling, rump smelling, tail wagging, play bowing… but there is never hugging. Even among the best of friends. In fact, the closest approximation dogs have to a hug as we know it actually means something other than friendship.

“Dogs, like people, have a particular way of greeting, none of which involves having a foreleg over the shoulder,” says McConnell. “But dogs do put a leg over the shoulders of another — either one leg or both legs — and it’s called ‘standing over.’ It usually relates to some form of social status or perhaps competition for resources, so it is considered to be [done by] a dog who is trying to get some control.”

Dogs also do this during the context of play as well, and you might have witnessed this while watching dogs romp at the park. But as Dr. McConnell points out, “Even in play, you can see dogs who are a little bit bullying in that they’re constantly standing on dogs, standing over dogs, pushing down on their shoulders. It is seen to be not necessarily aggressive but very assertive, controlling behavior.”

In primates, we wrap our arms around another’s shoulders as a sign of affection. But in canids, a leg over the shoulder is a sign of dominance or assertiveness.

“So when we [hug] dogs, how are they to interpret that?” asks McConnell. “At best, I think some dogs just shrug it off and don’t pay a lot of attention to it for whatever reason. For instance, golden retrievers are famous for their fondness for any kind of touching. But for a lot of dogs, they see it as a potential threat.”

The response a dog has when someone puts their arm over them is varied. “They’ll go stiff, they’ll close their mouth, maybe they’ll do a little lip licking. They’re anxious, they’re concerned, perhaps wondering, ‘Did I do something wrong? What should I do now? Should I just sit still and not do anything?'”

“We share so much with dogs; we love to communicate, we love to play, there’s so much we share. But we’re not the same species. There are things that are very different about us and how we relate to each other, and this is one of them.”