Here are some tips on preventing conflicts with Coyotes who have expanded their range and are now common throughout the state.  Coyotes are opportunistic and use a variety of habitats
including developed areas like the wooded suburbs we have in our area. 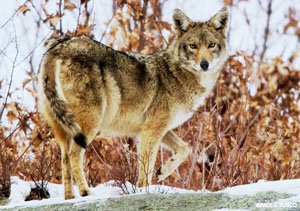 Coyotes resemble a small, lanky German shepherd dog, but have wide, pointed ears, a long muzzle, yellow eyes, and an uncurled, bushy tail which is carried low to the ground. Their weight averages between 30-50 pounds.

Eastern coyotes were first documented in Connecticut in the 1950s. Since then, they have expanded their range and are now common throughout the state. Coyotes are opportunistic and use a variety of habitats, including developed areas like wooded suburbs, parks, beach fronts, and office parks. Their ability to survive and take advantage of food sources found in and around these “man-made” habitats has resulted in an increase in coyote sightings and related conflicts. A coyote’s diet consists predominantly of mice, woodchucks, squirrels, rabbits, turkeys, deer, some fruits, carrion, and when available, garbage. Some coyotes will also prey on small livestock and poultry, and reports of coyotes killing small pets have increased in recent years. In Connecticut, unsupervised pets, particularly outdoor cats and small dogs (less than 25 lbs.) can be vulnerable to coyote attacks. Unfortunately, many pet owners are unaware of the presence of coyotes and the threat they pose, only to learn the hard way after their pet is seriously injured or killed by a coyote.
As coyotes have become more common and occasionally prey on small pets, public concerns about coyotes attacking people, especially children, have increased. Although some coyotes may exhibit bold behavior near people, the risk of a coyote attacking a person is extremely low. This risk can increase if coyotes are intentionally fed and then learn to associate people with food. Follow the tips below to increase the safety of pets and livestock, enhance human safety, and learn how to coexist with coyotes.
Tips on Preventing Conflicts with Coyotes
To report coyote problems and for control information:
Local Animal Control Division
DEEP Wildlife Division: 860-424-3011
To report animals that are behaving abnormally or are posing an immediate public threat:
Local Police Department
DEEP Emergency Dispatch Office (24 hrs.): 860-424-3333
Coyote Fact Sheet