For those of you who haven’t met my new puppy, I’d like to introduce you to him now. My family is so excited to have rescued him shortly after saying goodbye to our faithful dog Tracy this spring, Tracy was about to be euthanized when we selected her, having 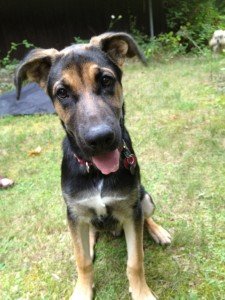 been falsely labeled as “a tough one to love and untrainable,” so we felt we owed it to her memory to rescue another dog. Within weeks the opportunity presented itself with Jack, a shepherd mix. Yuki, our 4 yr. old American Cocker Spaniel, welcomed him with open paws and a few corrections he learned from Tracy. Funny how dogs just know how to pass the torch.

Jack was behind in basic puppy training at 15 weeks of age (starting at 8-10 weeks is ideal) and I noticed that his bad habits were accelerating from the spoiling he was getting from my family who felt sorry for his previous ordeals. I needed to practice what I preach about the importance of starting training early. All to often I get calls for help with puppies out of control at 6 months, usually because proper socialization and training either didn’t happen early enough or was done improperly.

We’ve only had Jack a couple of months and he’s already mastering his commands and a few tricks (well, what did you expect with me as his owner?). I’m sure that in no time he’ll be as great a training assistant as Yuki is — but let’s not let Yuki know I said that….